The Rhythms of the River

We eat lunch in the shade of Navajo bridges (one is pedestrian and the other the highway). The guides break out aluminum tables and set out a spread of breads, cold cuts, cheeses, lettuce, sliced tomatoes and onions, pickles, and bean sprouts.

The river is the bathroom–guys go downstream to urinate and women up, but the guides are pretty informal and usually only step a few feet away, and it doesn’t take long for the guys on the trip to open their flies in sight of the group, and everyone learns how to avert their eyes at the proper moment.

After lunch we hit the first named rapid, Badger Creek, with a drop of 15 feet. (The River itself averages an 8 foot per mile drop over the course of the Grand Canyon, but the drops are concentrated in the rapids, short bursts separated by long stretches of flat water with swirling eddies and strong currents. The waves are big and the splashes feel good, but it’s a pretty straightforward run.

At mile 11.5 we come to Soap Creek Rapid, with a drop of 16 feet. The guides pull over to scout this one, since it has some big waves and a strong current that pushes boats hard toward a ledge on river left toward the bottom of the rapid. Dave is a strong boater and we run it just fine.

The trip leader, Ethan, leads us about a quarter mile on river left to a petroglyph unlike any I’ve ever seen before. Even for Ethan, it’s unique. Etched on a big slab of rock on the ground, is the shape of a man, or a god, or, to be honest, what would appear to most of us raised on science fiction and The X Files, an alien. The figure is over three feet tall, with a bulbous round head, a solid rectangular torso, arms extending out and down, almost akimbo, skinny legs, and what makes it really rare, besides the size, is the fact that the artist etched in a ground line extending several feet for the figure to stand on.

We camp on a rock ledge at Sheer Wall, so named because the rapid below the campsite was the first one Powell ran, since the walls were too shere to line the boats through the rapid. Despite the relatively small space, we each stake out a little territory and roll out our sleeping pads on our tarps. It’s too hot to set up a tent–the temperature won’t drop into anything like comfortable until well after midnight, so Julia Rose and I are glad for the sheets we bought at WalMart the night before. The guides sit on their rafts after getting the basics of the camp kitchen and the “Duke” set up, drinking Coors beer and relaxing after the long day of paddling. 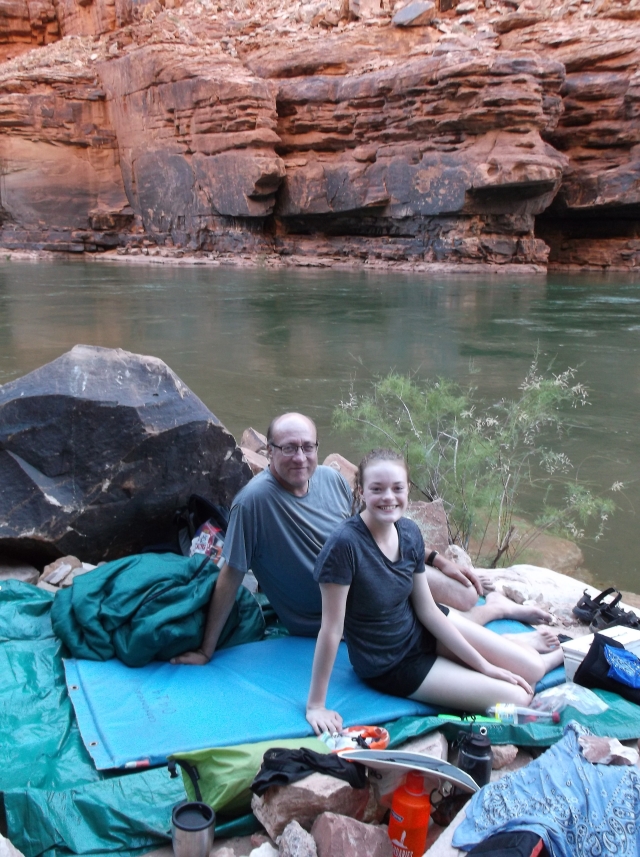 The duke is what we call the toilet, a sturdy sealable stainless steel looking container with handholds and an attachable seat and lid. A duke will hold the solid waist of a party our size for two days, so for the entire trip there are 7 “dukes” riding on one of the equipment boats. According to one of the guides, the Duke is named after John Wayne, who went down the river at some point and objected to the toilet being called the “John.” (It sounds plausible enough, though it could also be a bit of guide “lore” needed to satisfy the tourists.

Later in the evening, the guides begin to cook supper, taking turns each evening. Everyone in the group relaxes, some with their drinks of choice, and chat about the day or read or just sit and look at the lights and sounds and colors of the rocks and water. I sketch the upstream canyon and color it in with my colored pencils–not a great work of art, but something I want to try and do more of. At dark, it just seems natural to quiet down and get ready for bed. It’s the beginning of a pattern we will follow on the river, waking at daylight and settling down for the night shortly after dark. I try to read, but it’s been a long day, beginning before 5 a.m. back at the hotel in Flagstaff. The moon comes out shortly after dark, nearly full and lighting the walls and river. I’m afraid it may be too bright to sleep, but it dips below the walls of the rim around midnight. At the same time, the evening finally becomes cool and we are glad for the sleeping bags resting in the bottom of our dry bags.