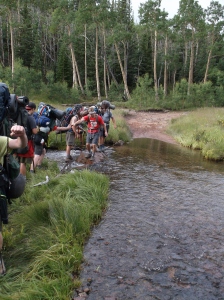 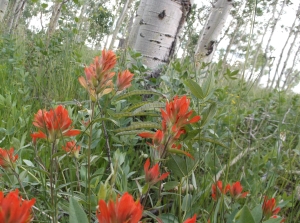 We woke in the morning and broke down the camp and packed our gear into our packs and stood near the trail eating granola bars and drinking hot chocolate and coffee, waiting for the signal to move out. I felt better in the morning despite the fact I had slept little. The cure for altitude sickness, as well as the prevention, is to drink lots of water, and I had drank nearly a liter before going to bed, knowing I would have to exit the tent a few times to relieve myself, but knowing I couldn’t hike the next day with my  head in a drum. Each exit required squirming out of a mummy style sleeping bag, hard enough anyway, but squeezed in a 4 person tent with three teenage boys, it felt like I was the mummy bag being pulled out of a compression stuff bag. Several times during the night, enough to lose count, I unzipped the tent fly, trying to be as quiet as possible, crawled out the narrow opening, walked a few steps away, and relieved myself while staring at a dazzling night sky, the stars shining sharp and bright like the headlamps of a car narrowing the miles of distance on a desert highway where you can see horizon to horizon.

Imagine hundreds, perhaps thousands of those car headlights, made sharper due to a new moon, protected from the light pollution of Denver by the Continental Divide a few miles to the East. It made it worth it, but getting back into the mummy bag was like trying to dress in a coffin.

Phil and Dupree called us to “circle up,” and they took turns telling us about the day ahead—“long and hard”—in halting Net Generation voices that were sincere, but weren’t practiced in assertion. They told us again the secret was to keep moving, to get our endorphins flowing. The day before Dupree had told me, as I was straggling at the back of the line, that he had named his endorphins: “barely there” and “long gone.” Mine didn’t stick around long enough to get named, I’d told him. 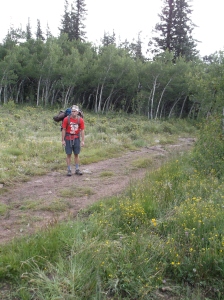 The day played out much like the day before on our hike to low camp. Our group was composed of hikers with a wide range of abilities, and, to my surprise, I was not the weakest link. The guides set a fast pace, and about five or six of our 15 climbers managed to stay with the leader, Julia Rose among them. I tended toward the middle of the pack, where I played leap frog with three or four hikers moving at my pace. I would stop to catch my breath and rearrange my pack and get passed by one, two, or three people, then catch them up on the next leg, when they would stop to do the same. I liked the middle of the line in part because it kept my pride intact, but more because I didn’t have to listen to the chatter of the kids at the front who had enough oxygen to burst into spontaneous song. While I was content to endure my pain in silence, I had to remember I was surrounded by 14 and 15 year olds who were intimidated by silence. Luckily, there was not much wasted breath from the middle of the pack, middle of the packers being by nature introverts. 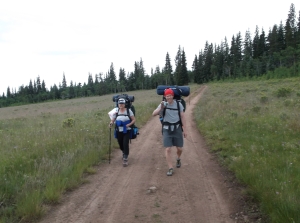 My strategy involved picking an object fifty yards up the trail and vowing to not stop until I reached it, and then repeating the trick, I was able to keep a buffer from the back of the group, where Pam, my elder by a year, a woman who had never even camped before but had accompanied her daughter on Trek, struggled. There were a couple of others back there, having as hard a time as Pam and me, and a couple more who could have been at the front of the line but stayed near the back to encourage the stragglers.