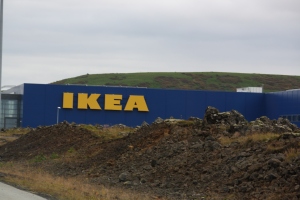 We arrived in Reyjavik at 9 am, Iceland time, after a 16 hour journey that was exacerbated by a 7 and a half hour layover in New York’s JFK airport. The flight to Iceland took off at midnight New York time, and though the plane was so underbooked that most of us got our own row, it was still hard to sleep. But we got off the plane and got our passports stamped and got all our luggage, then met Laren and Tyler Knight, the directors of the London program, and their 18 month old Viola, and loaded our bus and trailer with our luggage and took off.

Our guide and driver is named Sigurdur, a name like most Iclandic words nearly impossible for the average American to pronounce correctly, so he just asked to be called DeeDee. “My friends call me DeeDee so you call me that too,” he said. His accent has that Northern European inflection that makes it quite charming. He is 48, I will find out later, with reddish blonde hair beginning to go gray. He’s not a big guy, but he looks capable of handling himself in a harsh climate. The bus seats 18. On the inside it looks like a normal passenger van, but the outside shows hard weather and use on gravel backroads that lead to the most popular tourist attractions. The suspension is jacked up and it runs on oversized truck tires rather than normal road tires. In fact, most of the SUVs up here look like they’ve taken a shot of steroids.

Iceland reminds me of cities like Anchorage and Fairbanks, thriving under the long daylight of the summer and pabundant rain, so everything is green and growing wildly under the subarctic sky. There aren’t a lot of trees, though, so what we see is wild with grass and rock and moss and lichen, like tundra, with occasional groves of evergreen and river birch. Compared to the burned out heat drought and dust haze of Arkansas in late summer, it looks verdant. The buildings have that pre-fabricated hard winter look as well. The weather must be too harsh and the building season too short to worry about fancy architecture. Most of the buildings are steel-sided and look utilitarian, though often brightly painted. The words on the signs, though unpronounceable, do give the buildings a playful look.

We drive out of the city into the highlands, gaining altitude from sea-level through high elevation plains covered with grass and low-growing vegetation that I would call tundra, ringed by jagged bare mountains and various folds and cones that mark a landscape shaped by volcanic action, and dotted with heavy coated sheep that look as puffy as balls of dirty cotton. The bare rock outcroppings are hardened lava that swirled as it eddied and cooled. As we climb clouds of steam erupt from behind hills and the landscape is dotted with steam leaks from dozens of vents and pools across the countryside. After we stop at the top of a high ridge we hike over to an overlook above a powerplant that harnesses hydrothermal energy, converting the steam into electricity and pumping the superheated water down the mountain for miles and miles through a four-foot diameter pipeline. The whole city of Reykjavik is heated by the water from this plant.

We drive a little further and hike down a narrow fissure that opens into a wide valley that marks the divide between the North American and European tectonic plates, stand on a rock that marks the site of the first Icelandic parliament, formed in 930 A.D., where the law was recited each year because there was yet no written language. 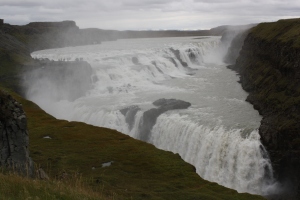 There was too much to describe, but perhaps the oddest thing that I saw was at Iceland’s most famous waterfall, Gullfloss. A powerful river has carved a hundred foot deep gorge 5 kilometers. At the point of the current waterfall, which falls a hundred feet over two fissures that cut at a 90 degree angle to one another, forcing the water to fall in two stages. Stella and I walked down a steep trail from the main overlook to a large lip of rock that looks out over the first fall. We had to pass through a heavy rain of mist and spray blowing off the falling water. As we were taking our pictures along with about thirty others who had made the short hike, we heard a commotion a few yards away. Six or eight guys were undressing down to their underwear–fairly racy low-rise bikins and banana hammocks and thongs. I thought they were going to do a polarbear swim–the temperatures was in the 40s and the water snowmelt–in an eddy above the falls, which meant they were probably about to die as they were swept over the falls. Instead the jumped the protection cable and stood in a group at the edge of the river, cavorting for the cameras flashing from every direction. The guy in the thong was shaking his bare rear at the world. After a few minutes, though, they put their clothes on and celebrated. Their accents were American, I think. Stella took it quite well.