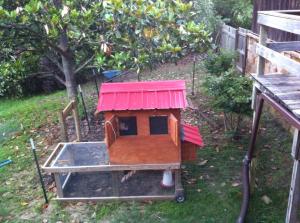 In the cool spring days after we get the chickens, Lisa takes her breakfast out on the deck that overlooks the coop and watches the chickens buck and peck and jerk their heads when they walk. Whenever I go out to look at them they run to the gate expectantly, perhaps because they associate me with food and treats, like overripe tomatoes, sunflower seeds, and watermelon and cantaloupe rinds. I like to hold out a handful of sunflower seeds and let them peck away. I don’t even think they crack the shells to get at the meat of the seed. Just swallow them whole. It is soothing to watch them scratch and cluck, and comic to watch them dash toward a piece of tossed fruit. All in all, there’s something soothing about the pecking and scratching and the soft chicken sounds they let out, and I understand why Laura, who owned the chickens before us, liked to go out and sit with them in the evening, much as I like to go down to the garden, to transition into a peaceful phase of the day. 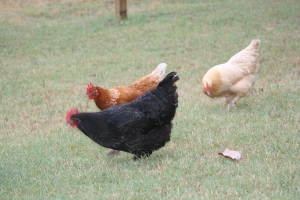 Toby is the boss of the coop and pen, and she is the only one of the chickens that I’ve never been able to catch, much less hold and pet. When dusk approaches, Toby herds the other three into the coop so that they will have time to fly to roost before dark. She is the last one up, and usually the first one out of the coop in the morning. Anabeth is a sweet chicken, a bit of a flirt. She is always the first off the roost in the morning, the first out of the pen. When I go into the pen she approaches tentatively, her head jerking back and forth in that chicken walk, looking for a treat. She fools easily and goes for my open palm, hoping for black sunflower seeds. She squawks when I first pick her up, but when I tuck her like a football and stroke her neck and back, she relaxes and makes a soft bucking sound. She is soft and surprisingly lite, and the intricacy of her feather pattern is fascinating. When I put her down Anabeth follows me around as if she wants to be picked up again, though it’s possible, with her tiny chicken brain, that she’s forgotten what just happened. Bailey will be held if I trick her like Anabeth. She seems to me to have the least personality of the four chickens, though she does have a tomato fetish and when I let them out of the pen to stroll and scratch the back yard, she makes a beeline for the garden.

Harper is the biggest of the four chickens, though most of her size is fluff, because she constantly flaps her wings and ruffles out her feathers. She can fly, and has flown out of the pen a few times, but mostly she complains loudly and charges me when I open the gate to the pen. A few nights ago, when I went out to lock up the chicken coop, I found Harper sitting alone on the chicken run, nestled against the coop for warmth, listening to her sisters inside the coop, safely on their perch for the night. The temperature was already in the low 20s and falling later that night into the low teens. Harper had flown out of the pen but couldn’t get back inside when dark began to fall, so she did the next best thing. I imagined I heard chicken laughter from inside the coop as I opened it up and set Harper on her perch, jostling the ladies aside to make room for her. 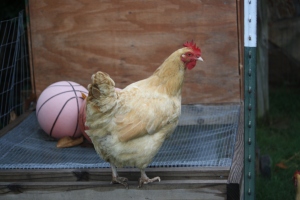 Harper on the chicken run

Laura told me that Harper wanted to be the boss, rather than Toby, but she couldn’t convince the other chickens to switch their loyalty. Harper likes to brood, which means she will take a mood to sit on the nest and hatch the eggs, even though the unfertilized eggs would rot before making a baby chicken. This poses a problem because even though there are two nest boxes, side by side and identical, the chickens will only use one of them. I’m sure there is a chicken-logical reason to explain this behavior, but it is beyond me. Advice from the many chicken forums available on the Web ranges from dunking the chicken in ice water, lowering the body temperature and tricking the brood impulse, to isolating the offending chicken in a wire cage in the middle of the pen, so that the brooding chicken becomes an object lesson for the others who might decide to become broody as well.